C.T. Walters
I retired from the real world except for a dream job as Official Scorer for the Harrisburg Senators Double-A minor league affiliate of the Washington Nationals

The Trade of the Century (Almost) 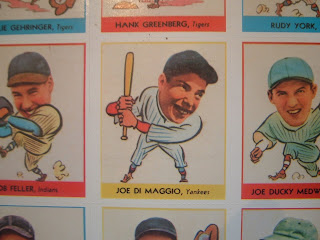 One night in 1946, or early 1947, Larry MacPhail, general manager and part owner of the Yankees, and Tom Yawkey, the sole Red Sox owner, started drinking and talking about their two star players. Red Barber summarizes the conversation in his great book 1947 - When All Hell Broke Loose in Baseball: "MacPhail recounted for Yawkey what DiMaggio had done by hitting balls against and over the Green Monster...how electric DiMaggio would be to Italians in Boston...that Williams was having strained relations with the Boston writers...that DiMaggio got along splendidly with the press. MacPhail was a very persuasive man." "Yawkey agreed to the trade--Williams for DiMaggio. They shook hands on the deal, had another drink, and both men went to bed."

The deal was done, but the next morning Yawkey personally sought out MacPhail and very apologetically cancelled the trade, even though he had given his word. He couldn't bear to see Williams leave the Red Sox. Was this typical Tom Yawkey decision-making? He treated the Red Sox as his family as much as he did a business.

A sober Tom Yawkey saw the risks more clearly the next day. My theory is that Yawkey did not want to be the author of another Babe Ruth debacle. Harry Frazee had incurred the eternal wrath of Boston fans for selling Babe Ruth to the Yankees. If DiMaggio did not return to his all-star form after his recent ankle surgery, Yawkey would wear the goat horns. Williams would no doubt continue to be baseball's premier left-handed hitter, especially with Yankee Stadium's short right-field fence just 296 feet away.

DiMaggio did recover from his injury and lead the Yankees to 1947 World Series victory over the Brooklyn Dodgers and their new star Jackie Robinson.

MacPhail most likely knew that Williams would not greatly exceed DiMaggio's impact on the Yankees. Nor would he perform significantly worse than DiMaggio. Williams would have been an insurance policy against DiMaggio's sudden demise as a superstar.

Had the trade been consummated, Paul Simon would have to take a whole different approach to his most famous song:

Where have you gone, Joe DiMaggio?

One last thought on DiMaggio and Williams. Imagine if you will, Ted Williams AND Joe DiMaggio in the same line up. That scenario is not as improbable as it seems. In 1935, Yankee scout Bill Essick offered a young Ted Williams $200 a month to sign with the Yankees. Ted’s mother nixed the deal to keep the 17-year-old in hometown San Diego to finish school. While still in high school, he signed a contract to play for the minor league San Diego Padres where he was noticed, and later signed by the Boston Red Sox.